Cleaner. Inexhaustible. Cheaper. These are some of the attributes that follow renewable energy source production. So, why is this type of energy still being considered an “alternative” option?

One (and perhaps the most important) of the reasons is the technological lock-in that the present and dominant technological regimes (or paradigms) are being controlled by. Lock-in is explained by technologies and technological systems that follow specific paths that are difficult to escape. The main reason for that tends to be the cost.

It takes many years, often decades, to build and establish industrial processes, and it takes longer periods of time to recover the costly investment and, eventually, profit. Hence, the economy behind these industries is very reluctant and often defensive regarding new paths to take. That is the reason why we have continued the use of a range of supposedly inferior technologies, ranging from the QWERTY keyboard to the internal combustion engine.

According to researchers Hård and Jamison, it was Thomas Alva Edison who was working on the development of electric batteries that would increase the driving range of electric cars at the beginning of the last century. We are talking about the period in which the performance of cars powered by fossil fuels was still far from those that made them the object of desire and the universally desired symbol of social status. (See: Be smart!)

The noise, the smell, and the annoyance of having to change gears were just some of the early drivers’ complaints. «In this situation, electric cars seemed to be the best solution,» say the authors of the book. They were quiet, easy to operate, and did not smell bad. Even so, the automobile industry decided to bet on internal combustion cars. The reason was that the engineers considered this alternative to be «more exciting.» 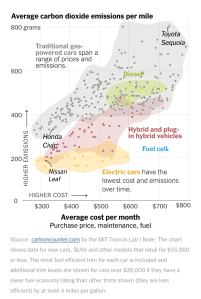 Today, the research shows that electric cars are not only more climate-friendly than gas-burning ones. They show other important advantages, as well. When considered that they prove to be often cheaper (see the image attached) too and that the power of generators and design is making them as exciting to drive as any other car, it is hard to imagine a future where electric cars are not the dominant and, why not, the only option available.

This trend is followed by the fast dropping production costs of renewable energy. Even though major nations, including the United States and Russia, are throwing a lifeline to fossil fuel companies during the coronavirus crisis, renewable energies are gaining momentum.

Affordable and clean energy is the 7th UN Sustainable Development Goal. It aims to provide sustainable solutions for electric power, which is a vital force for all economies. In the effort to find options that can reduce GHG emissions and offer lower production costs, governments and other customers assess the pros and cons. That is why affordable still stands upfront in the description and aim of this SDG.

But the Covid19 pandemic has accelerated the paradigm shift and is slowly breaking the lock-in. This is particularly the case of the Nordic Region where, according to AFRY, solar PV capacity is outperforming pre-covid19 expectations, making renewable energy industries becoming an attractive opportunity.

While it is true that the Nordics have higher GDP and living standards than many other parts of the world and, as such, can afford this type of investment, this is not an isolated case but a part of a global tendency. According to the World Economic Forum, in two-thirds of the world, the cost of energy obtained from wind and solar PV is now lower than new coal and gas plants. The same estimates predict that the production cost for solar energy will halve while wind energy production costs will converge at around $30MWh.

This means that we are already reaching the first part of the SDG Nº7! Soon, the solar, wind, and other renewable energy sources will no longer be considered an alternative, and the SDG Nº7 will simply state CLEAN ENERGY. ‘Affordable’ is becoming redundant in the SDG7 title. Fast!