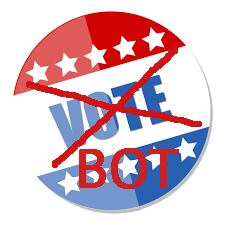 “More than half of Internet traffic today comes from bots. These non-human visitors crawl the web constantly, their numbers are increasing, and they are getting smarter and more human-like by the minute.” The results from the annual Imperva Incapsula Bot Traffic Report reveal many aspects of modern society but perhaps the most important one relates to the processes behind the forming of public opinion.

The online visibility has become a highly prized commodity. As such it generates a whole new economy. The Influence Economy. Facebook, Twitter, and Instagram are its main market and, due to the complexity of their global structures, the regulations are slow and often inefficient. The Influence Economy rules obey algorithms and that is how its business models are formed. In this ‘Cyber Wild West’, likes and followers are the main commodities while the rules are defined by “let the chips fall where they may”. What happens most of the time is that the chips fall to the side of quantity. The number of followers determines the influence while the quality remains secondary and is often labeled as ‘elitist’ or ‘establishment’.

“I wanted to understand this new, lawless economy. What is real and what is fake? How do you beat the algorithms? Who is actually profiting from this? And how does this influence the average Instagram user?” says Nicolaas Veul, filmmaker and journalist who authored #followme, a documentary about Instagram and the industry built by “entrepreneurs” that sell bots. The film evidences the enormous amount of money being made by people who control millions of false accounts and sell them to anyone who wishes to increase their audience. It shows that an average of 20% of followers behind celebrities is fake accounts, as well as a huge amount of likes and comments that follow their accounts. On the other hand, nearly 15% of Twitter is composed of automated accounts while the numbers disclosed by Facebook to its investors show “that up to 60 million automated accounts may roam the world’s largest social media platform”.

Who profits directly is quite obvious but (unfortunately) not illegal. The reason I use the double negative in the previous sentence is because large parts of the influence economy fall under the legal gray zone. In most countries, there are no laws prohibiting this kind of economic transaction. But the main problem is not the economic profit being generated by the ‘fastest drawn gun’. The main danger comes from the political profit being generated by the “alternative facts” oriented opinion-makers and the unscrupulous political leaders supporting them while fishing for votes.

Bots are votes. Although robots don’t have the right to vote (at least not yet! We still have to see where the debate on granting robot rights and robotic personhood may lead to) they have a huge impact on the public sphere. By drawing attention towards determined content and generating discussion around it, they steer the eye of the voter and influence the final outcome.

The advantage of counting with thousands or millions of ‘followers’ is obvious. Whatever kind of statement given immediately gets turned into a giant snowball that on its way down gets bigger and bigger. Eventually, it becomes an avalanche that crushes any attempt to validate the accuracy of the statement.

With half of the internet traffic being generated by robots and an enormous amount of false identities influencing the audiences, the line between true and false becomes blurrier than ever. Hence, reality and fiction become psychotically intertwined in a way that loud became synonymous with truth, and ‘speaking one’s mind’, without any regard for facts, becomes admired as ‘freedom fighting’.

Perhaps the most knows example of it is InfoWars. Despite having confessed that it was ‘sort of psychosis’ that made him promote the theory that Sandy Hook school shooting was staged, this did not diminish Alex Jones’s conspiracy revealing credibility. He was found guilty and ordered to pay $100,000 to the parents of a six-year-old who was among the 26 people killed in the school attack. Yet, despite openly admitting that his theory was a hoax and accusing the grieving families of being actors was nothing but a product of his imagination, Jones remains the ‘alternative facts’ authority. A ‘tireless fighter’ for the freedom of speech,… and millions of dollars that ‘freedom-fighting’ generates in commercial revenues.

Since his audience keeps giving him credit and trust he recently simply replaced ‘Sandy Hook’ with ‘Covid19’. The rest of the narrative and casting, ranging from lizards to establishment, remains the same. His outbursts of rage feed into the narratives of fear that keep scoring points for deeply irresponsible political leadership. It prepares the apocalyptic scenario background for using the images of episodes of looting and violence that emerged during the Black Lives Matter protests to claim that this is what the USA will look like if Biden becomes the President.

The absurd of the given practice is that images of reality are being used to construct the fictitious vision of a catastrophic future. As if these same images of reality had nothing to do with the effects of the political leadership exercised under the current Presidency.

All it takes is the army of bots activated to support this narrative and to let the avalanche do the rest.

Public opinion is one of the pillars of modern democracy and holds freedom as the absolute ideal that precedes any other. But freedom, where the public opinion is shaped by bots, is not the ideal upon which justice and equality can be sustained. That kind of freedom is a psychotic fabulation that only benefits the short term interests of selfish, greedy, and unscrupulous characters. Those political opportunists that profit from the “Let chaos reign, then rein in chaos” scenarios that are fabricated by ‘fear-entrepreneurs’ backed by armies of bots built to support them.

As the elections are approaching, their roar is getting louder. Marching under the Eye of Sauron, following the beat of the drums of Mordor. Armed by hate and anger spreading terror for ‘One ring to rule them all’.

The first presidential debate did nothing to silence the war drums. On contrary, it added more fuel to the fire and gave a sad image of what once aspired to be the leading country as a developing one.